On Bullshit: The Newsroom 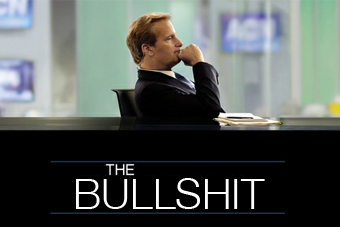 We're now two episodes into The Newsroom, HBO's newest entry in chatter-inducing Sunday programming. Reviews of the show have been brutal, but asking a media critic to judge this show is like asking a cannibal how his gallbladder tastes. Outside of media circles (amongst the vegans, to continue this overwrought metaphor), the show seems somewhat more widely appreciated.

This phenomena fascinates me. We seem to have some sort of uncanny valley relationship to art. If we are extremely close to it -- if the subject matter is about us -- then it is very likely that we find the similarity ugly, a disfigured clone of ourselves. The entertainment landscape is littered with examples of subcultures (professions, geographies, lifestyles) disagreeing with how they are portrayed by mainstream art.1 It makes you wonder: When does a subculture actually ever like art about itself?2

The anxiety in appreciating art about oneself probably involves some deep Lacanian mirror stage shit. Or maybe it's dormroom pop psych: We are apprehensive about the shortcuts that art must take. We don't enjoy having our subcultures portrayed because it reduces ideas down to sketches, people down to characters. Local significance loses to storyline, depth loses to drama.

So duh, of course we media people hate The Newsroom. It's characters don't act like our colleagues, it's fantasies aren't our realities. So what? Part of me wants to say, fuck it, that's our problem, not Sorkin's. But other times, I'm like, wait, that's fucking bullshit.

I want to talk about the part that's bullshit.

I worked in newsrooms for over 10 years, most of the time at websites attached to TV stations or networks. I've seen, and usually participated in, the creation of news around executions in Texas, riots in Seattle, hurricanes in Florida, and psychotic killing sprees in Virginia.

What I offer here is not an artistic or moral assessment of The Newsroom. Despite having nuanced qualitative opinions about the show3, that's not what we'll be discussing here. Let's temporarily ignore the finer ethical and aesthetic points, which are usually finessed as blustery diatribes, and instead focus on what's believable.

What's bullshit, and what's not?

That eruption from Will McAvoy in the first scene. Yeah, this is kinda bullshit. It's easy to imagine an Olbermann-like figure doing this (actually, that's all he did), but it's pretty unimaginable for a Brian Williams or a Katie Couric. Or maybe our hero is supposed to be more like Dylan Rattigan or Rachel Maddow? Actually, who knows! The way this show blurs the monolithic network anchor with the opinionated cable host is precisely the kind of fake construction that feels like bullshit. Or as the greatest news anchor of our time would say, a great moment of truthiness.

Having a blog. Not bullshit. Olbermann had one, Maddow has one, Brian Williams has a couple, Tucker Carlson has a whole goddamn site.

Not knowing you have a blog. Complete bullshit. This portrait of social media ignorance would have been accurate 10 years ago, but television executives started to freak out about the internet a while ago. They've spent an immense amount of time catching up, so now they're better at Twitter than you.

Walking into a newsroom and yelling "Punjab" to the Southeast Asian character that you know isn't named Punjab. This would never happen, even if your name is Sean Hannity. Bullshit.

Calling out someone as a "sorority girl." Sensing we would deem this bullshit, Sorkin set out to prove it's not.

Dating people you work with. Not bullshit. The only professionals who fuck each other more are actors.

Arguing with people you date while you're working. Not bullshit. The only professionals who argue with each other more are politicians.

The speech from an Executive Producer about fearing Halliburton and the lawsuit it would bring. Bullshit. I don't know a reporter who wouldn't love to catch Halliburton, Scientology, or whatever big scary corporate entity you name. The mere fact that Time-Warner-owned HBO aired this scene seems to completely undermine any truth it is seeking to reveal.

Hiring a new Executive Producer without telling the anchor. I would say this is bullshit, but I've recently heard a story similar to this. Judgement: perhaps not bullshit.

Running to your agent when the President of News hires an Executive Producer over the top of you. Yeah, they're prima donnas, so this could happen. Not necessarily bullshit.

The ongoing debate between popularity and quality. This would never be said aloud. However, it subliminally infuses every newsroom decision. Pseudo-bullshit.

Forgetting the name of your hot blonde assistant. If this show is actually modelled on Olbermann, then this is bullshit. He'd never forget that.

Having a President of News who is drunk "most of the time" at work. Being a heavy drinker can still be romanticized within some media circles (especially if you hang out with bloggers), but being regularly drunk at work would simply not be permitted any more, at any level. Drink up, that's bullshit.

Figuring out the oil spill that quickly. This is probably the single most annoying thing in the first episodes. If you remember the evolution of the oil spill story, it took weeks for scientists to figure out what our Happy Band of Googlers sleuthed out in a few hours. Complete media fantasy bullshit.

An executive producer threatening an anchor with a fake on-air graphic seconds before going live. Reminiscent of both Broadcast News and Network, this nifty dramatic effect was as much bullshit then as it is now.

Not knowing where your control room is. Crazy bullshit.

FOX News hiring someone with three Mohammeds in his name. Pass.

Sending an email that accidentally goes to 178,000 people. Yep, bullshit. Of course email groups like that exist, but they were introduced to corporations 10 years ago, not last year. So not only does everyone know how they work, but we all also know that not everyone has access to email all those lists. A reply-all snafu would have been less bullshitty.

A fluff newsreader with a PhD in Economics from Duke and an adjunct professor at Columbia. Sure, this is supposed to be Erin Burnett, but still bullshit! She's barely old enough to have a PhD.

The Three I's. That kind of bullshit would actually happen, so it's not bullshit.

Minutes after delivering the sanctimonious Three I's, commenting on a reporters legs. B-------.

The organization of this network. This is one of the more perplexing elements of the show. ACN is apparently a 24-hour cable news outlet, but this show gets the network treatment. Cable newsrooms are much more fluid than this show suggests, with more interaction of programming and personnel between shows.

Hiding under a bed while your date fucks his ex-girlfriend. I have less expertise on this matter, so I'll let you call this one.

Correlating quality with verisimilitude is always a dicey proposition4. But when a show places itself into history with real news events, and within a professional industry whose mandate is exposing truth, The Newsroom must be aware that it has put itself under the lens of realism's scrutiny.

The Newsroom rubs so close to reality that it makes you wonder how Will McAvoy would feel about it. After a long walk, some nifty orchestration, and a verbose conclusion, he'd enter his closing judgement into the chryon: It's bullshit.

1 For example, I lived in Fargo when the movie Fargo came out. To this day, the city has an extremely antagonistic relationship toward their portrayal as noble unsavages with snowboots.
2 The answer? Lawyers always love seeing themselves.
3 It's bullshit.
4 Didn't those dragons in Game of Thrones grow up just a little too quickly?

There are probably some connections to be drawn between this situation, the hand-wringing over similar "truths" in "The Social Network," Mike Daisey, and some other postmodern non-fiction writers (like John D'Agata) who are trying to capture (or claiming to capture) the essential truths of a situation.

It seems that the audience of media insiders for this show, as you point out, can't separate themselves enough to look at it as a story, and can mostly only evaluate its verisimilitude. Hence, the crappy reviews.

My feeling is that when something is presented as non-fiction, it has an obligation to adhere to the reality of what happened. When something is presented as a fiction -- like, I would argue, The Newsroom is -- then there is no such obligation, and the question becomes whether the story is told well or not. (In The Newsroom, the "punjab" comment and the drunk boss seem so unbelievable [to me, at least] that they decrease my enjoyment of the story.*) In The Newsroom and his other works, Sorkin does a nice job of elevating the audience's anxiety by walking the thin line between fiction and non-fiction. For me, the problem is less that his shows get some details of reality wrong and more that he often he gets hung up on the grandiosity of his ideas (e.g., Studio 60's notorious "This show is important!" sensibility), and the quality of his work suffers for it.


*The later seasons of Mad Men had the same effect for me.

Yeah, the pomposity is the bigger problem, for sure. For the moment, what's holding my interest is watching Sorkin create a fantasy media world that he wishes existed. This is precisely what other people are criticizing (and maybe I am too, above), but the meta-ness is also what's keeping me engaged in some way.

What does it say that media people hate this show, but ad people love Mad Men? (My opinion being that Mad Men is also kind of bullshit. For the record, I enjoy both shows.)

It's almost impossible to not think of Mad Men while watching this, right? I guess Mad Men has the advantage of being a more distant past, but I suspect Weiner also just gets it right.

I think he does the period well. The only thing he gets right about the ad business is that the people are mostly overvalue what it is they actually do.

... and honestly, has Mad Men really been about the business of making advertising for the last several seasons?

I'm not even sure it's about men anymore.

That is good, I have personally really enjoyed newsroom - obviously not being in the media I have no bullshit filter for it, but as they say truth is often weirder than fiction!

NOTE: The commenting window has expired for this post.